The mirror was stripped out of it’s old ‘cell’ – I use the word loosely as the cell is basically just a hat plate with some brass shims on the edge to stop be the mirror falling out. No flotation system of mirror retainers or clips held it in situ. But I suspect at a 1:7 thickness ratio I don’t suppose the mirror maker was too worried about supporting it. Besides, PLOP wasn’t around in the 1930’s. Neither were 25nm transistors, Pentium quad core processors or finite element analysis!!

After 2 weeks the mirror was returned recoated with Orion Hilux 97% coating and Orion Optics  made a superb job of both so very pleased with that. 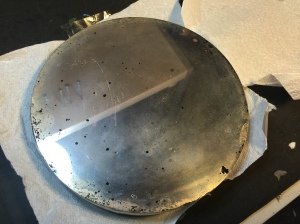 However with every story there’s a sad part. After doing a double pass or Ronchi test on the mirror the engineer deemed the mirror to be ‘over corrected’………

And that’s it. £35 pounds for testing it and I get a vague scribbled note and practically useless sketch. So i’ve emailed Orion optics back for a bit more information and the actual Ronchigram images. I was told over the phone it’s about 1/2 wave out which in my mind is not just  ‘slightly’ over corrected.

I’ll need to compare the images to the ‘ideal’ generated in Mel Bartels excellent Ronchi calculator.

It is possible the 80 years ago when the mirror was made the figure was perfect but over time the glass has slumped. Given that glass flows over time it is entirely possible.

So i’ve got the problem now of what do I do. This is a planetary scope and it’s not going to reach a crisp focus over corrected so i’ll need to get it in the OTA to gauge just how badly it’s affecting the image. I’ll also need to build some testing aparatus i.e. a Ronchi test and/or Foucault test. Francis O’Reilly at Sellafane has suggested an Auto collimator or bath interferometer, the former requiring a flat mirror at least as large as the primary. Mel Bartels has some excellent info on calculating ideal and interrupting the actual Ronchigram.

I’ve basically got 4 or 5 options:

2/ Get Orion optics to re figure the mirror (very expensive)

3/ Order a new custom mirror. (probably cheaper than refiguing and recoating the old one!!)

4/ Live with the sub optimal images and use for widefield low power (not an option as far as i’m concerned.)

Ahhhh what’s the 5th I hear you ask….? There is one more trick up my sleeve. Back in 1992 a rather clever gentleman named Alan Adler created what he called a ‘flex mirror cell’.

The principal is very simple. You grind the mirror to a sphere and you pull it to a paraboloidal figure. I do the concept a disservice and it’s worth clicking the link to this article as it is a fantastic idea and works very well.

So how does that help me? Well what I have is a mirror that is over-corrected which means that it is is ‘too paraboloidal’. In fact there is no such thing as too paraboloidal. It has become elliptical. To correct that I need to push the mirror at the centre, not pull as in this design. I want to get back to a paraboloid. It’s probably worth noting at this point that 7.5in F8.8 JUST satifies the Raleigh criterion at 1/4wv with a sphere but for better than 1/8wv its still fair to say I need  to arrive at a paraboloidal figure. Either way it’s over-corrected.

The principals are the same so I see no practical reason why it wouldn’t work. The engineering and design required to create an over-corrected corrector cell will be somewhat different!!!

I’m open to suggestions from any readers mechanically minded that think they can achieve this……….

The 34mm secondary mirror coated up nicely but I may purchase a 25mm flat anyway as it is after all a planetary scope.