A treasure trove goodie box of old eyepieces and trinkets…

Along with the 1930’s scope I inherited came a box of old oculars, lenses, prisms and gadgets whose purpose remains unidentified…… 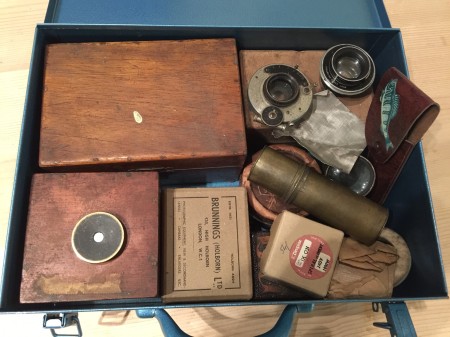 The two big wooden boxes contain  eyepieces, with some adapters but unfortunately not in any size I recognize as being of the 0.96in or 1.25in standard. They must be from around the 1930’s when the scope was being used. That’s a fisherman’s knife in there also. Still has a nice sharp edge. There are boxes filled with tiny lenses, prisms, filters and brass odds and sods. 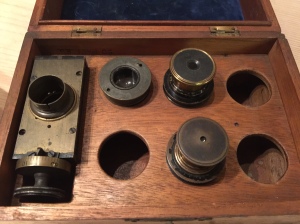 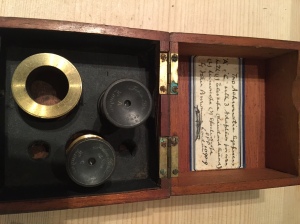 The text on the inside of the box reads  ” Two Achromatic eyepieces ‘A’ & ‘C’  with 3 adapters for use with (1) Telescope (standard thread) (2) xxxxxxxxxscope   (3) xxxxxxxxscope. John Brunnings London.”

EDIT!!  A kind reader had informed me (2) is ‘spectroscope’ and (3) is ‘microscope’. The strange looking oblong eyepiece is in fact a Filar Micrometer for measuring for example star separation of binaries.

There’s a solar eyepiece also with a heavily blackened optical surface but I don’t think i’ll use this on my 20in Dobsonian. It might start a singularity, or a least burn a hole through the back of my skull. 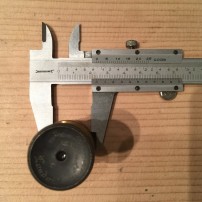 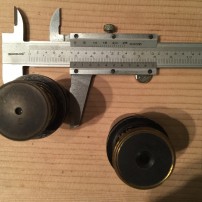 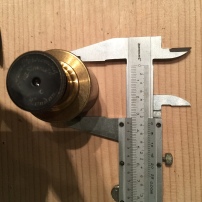 The only eyepieces coming close to a recognizable size are the 1-1/8in ones. 0.96in was a recognized standard but none of these are that either.

Being of the curious mind type, I dug around the web and found this catalog from the ‘manufacturer’ or at least the supplier of these oculars which I suspect are Achromatic Ramsden’s. Brunnings, London of Holborn was a family run business stocking cameras, telescopes, mirror sets amongst many other optical products. Established in 1921 it appears to have been run by the Brunning family right until it’s demise in 1982. 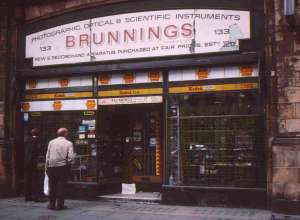 The above link was from their final catalog but my eyepieces, despite being marked ‘Brunning’s’ appear to be a lot older and not of any current standard fitting.

I found these strange items in the box…..some sort of Knife edge testing aparatus?? 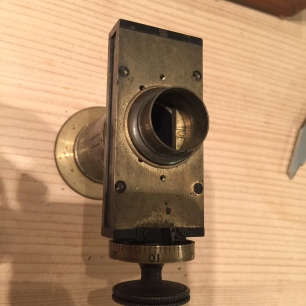 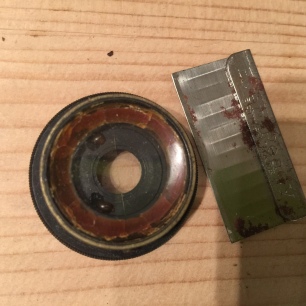 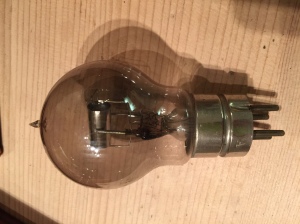 This old light-bulb was in the box too. I can only assume it once would have had a home in the observatory. I’ve had a bright idea though. With a good variable power supply and a couple of croc clips this light might just get switched on again for the first time in over 50 years, an illuminating experience to be sure.

Time to crank up the lathe and make a few adapters for those weird sized eyepieces. Jupiter’s Great red spot may once again pass through those old oculars. Imprisoned in a box they will no longer be!!!

2 thoughts on “Through the Looking Glass”